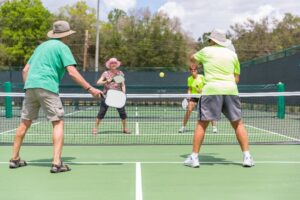 Pickleball is a game created in the 1960s that has become one of the fastest growing sports in the last 5 - 10 years, especially for Baby Boomers. It is a fun racket sport that is less taxing on the body than tennis yet is just as fun and can be a real workout. It is played on a court about half the size of a tennis court with a ball similar to a whiffle ball and paddles about twice the size of a ping-pong paddle. It is easy to learn and you can get very sophisticated in game play. If you played tennis, racket-ball or table tennis or badminton before that really helps. There are even PB Professionals and national championships. Search for lessons or watch matches on YouTube

We have 15 PB players from Newcomers or Alumni group.  Most started playing late last summer after an orientation/training session or two that I was able to provide. We play at the New Bern Recreation Center that has six outside courts and currently one inside court.

We mix with other non-club members who play the game.  There is a Team Reach app you can install on your Apple or Android device to be connected to this broader community in order to learn when others are playing.   We generally play with 4 people to a court, so having others around to join in play is helpful. The Rec Center play is busiest MWF and then Sat and Sun mornings.  There is evening play with lights too.

To be added to the group's email list, sign up at a general meeting or email the group leader.

For Info on Scheduled Activities

Also, check the latest newsletter on the Newsletter page. 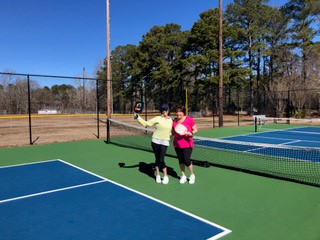 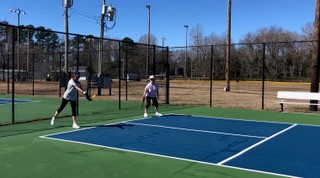 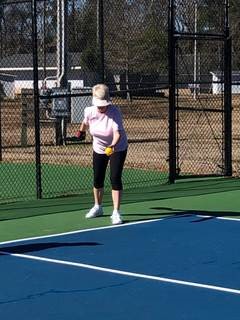 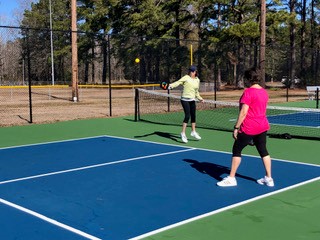 Welcome from the Newcomers Club of New Bern

The Newcomers Club of New Bern welcomes you to the great state of North Carolina and to the wonderful city of New Bern.